Mandarine Montgomery is a Melbourne based photographic artist and Master Photographer with the Australian Institute of Professional Photography. She joined the PSC team in December 2017 in the role of Communications and Future Students Co Ordinator. She has worked in many genres of photography, but her passion lies in conceptual fine art portraits and live music photography. Here she gives her top ten tips for nailing a gig shoot. 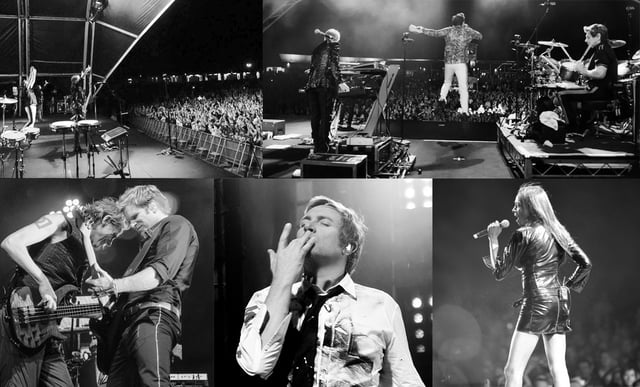 1. Have the right gear. Now I will always say it is the PHOTOGRAPHER that takes a great image, not the camera, HOWEVER, in this genre, if you have the right tools to begin with, your job will be so much easier. A couple of bodies with different lenses e.g. a long zoom and a wide angle, will mean you won’t waste valuable time changing lenses and miss the “money shot”. You are working in low light with massive fluctuations of brightness, so a fast lens (like an f2.8) will give you more flexibility and you will be able to keep the shutter speed fast enough to freeze the action. A camera that produces images with very low file “noise” at high ISO is imperative too. You will often shoot at 1600 ISO or higher so a camera with minimal “noise” on these settings is the way to go. (*Noise is the grainy look you can get as a result of shooting in low light). Once you get the images into an editing program such as Lightroom or Photoshop you can further reduce the image noise.
2. Have plenty of spare memory cards. You will be amazed at how much you actually shoot especially if you are shooting a whole show. Memory cards with a fast rate of upload and processing speeds are vital too. This means you won’t miss a beat.

3. Shoot in RAW! This will be much easier to post process to bring back some detail in the shadows or knock back some of those highlights. You are shooting with extreme dynamic range in these situations, so anything you can do technically to help improve the image is gold. If you need jpegs to send instantly, set the camera to “raw+jpeg” so that you can create some magic with the images at a later date, handy if management want to use them for calendars or merchandise.

4.Dress appropriately. For me, shooting a band’s live concert means black, black and black. This isn’t to look cool, but rather to stay low key. The last thing you want is the drummer losing his train of thought in the middle of a solo when you suddenly pop up in front of the stage in a bright yellow top. It also ensures you aren’t ruining live footage if the show is being taped.

5. Research the band. Check out their official website and merchandise to get a feel for the sort of images they like. Some of them may dress pretty shabbily, but they still want to look sharp in pictures. If the opportunity has presented itself, ask what they are after. They are generally happy to tell you as it means better images for them.

6. Don’t be a “super fan”. Be polite and friendly but playing the “fan” card will quickly lose you future gigs and potentially a bad rap in the industry. Treat everyone with respect- especially in this environment, you could find out later that the little annoying guy in the corner is actually the brother of the guitarist!

7. Respect the stage crew. Follow their direction for your own safety and everyone else’s. There are masses of obstacles and spaghetti like cables everywhere backstage and I know of a gig that virtually came to an end when all the lights went out and the music stopped. The band redeemed the show with a single spotlight and acoustic guitars. The saying “the show must go on” really is true in this industry. I missed that gig but heard it was legendary- the way they didn’t skip a beat when things went wrong!

8. Edit well! It’s very easy to shoot 1000 images at a gig with digital, but don’t overwhelm the band or management by giving them every image. Best case they will get confused, worst case they will think you aren’t that good at your job with a “spray and pray” attitude! Shooting a full gig, I wouldn’t give more than 30-60 images tops to management and that would be a combination of group shots, individuals of all the band members and loads of different angles and feels, including other supporting elements- crowd, detail shots, backstage and sky/stage itself if the gig is outdoors. Extra elements and creative angles add to the story and feel of the concert, and they will love that. If the band members ask to see some shots, stick to just a dozen or so of the ABSOLUTE best from the selection.

9. Be efficient. Getting the post production done quickly and efficiently is of utmost importance and I always work into the early hours after a gig to make sure I have finished images ready within a few hours. This will really win you kudos with management and the band.

10.Have the right skills and knowledge! Finally, it might sound logical but make sure you do the shoot to the highest standard possible. That means know your gear and the technical aspects of photography. Doing a dedicated photography course like the ones provided at Photography Studies College will give you the knowledge and skills you need to give you the confidence to nail the shoot and enjoy the gig at the same time. A great series of images will lead to more work and that is the outcome you are aiming for. Good luck!