PSC was absolutely delighted to host the Victorian Minister for Training and Skills the Hon Steve Herbert yesterday. The visit was organized by the Australian Council for Private Education and Training, (ACPET) which planned a tour of its member institutions in the CDB area.

Minister Steve Herbert was delighted to be met with such enthusiasm by the welcoming party, of students and staff. Being a former teacher himself, he was absolutely in his element when he conversed with students; taking the time to relate to them on a personal level, sharing anecdotes and asking them profound questions about forming life-long bonds with fellow classmates. The Minister immediately recognized the close-knit nature of our community, as he witnessed the beauty of an entire institution filled with like-minded individuals who create unique and meaningful projects. 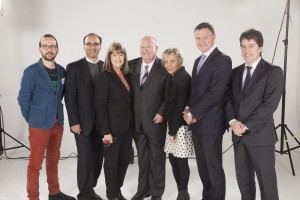 He was then taken around the college, starting with the Resource Hub where he was delighted to see such a large collection of photography-related publications. At the print shop, he took the time to discuss the intricacies of printing techniques and the busy schedule of students as well as clientele with Production Manager, Peter Hatzipavlis. The Minister was taken by the ‘Portrait of Ali’ hanging by the desk, noticing the talent of PSC teacher Hoda Afshar, who won the 2015 National Photographic Portrait Prize for this photograph.

The Minister then took a tour of the digital centre and various classrooms. He was intrigued by the discussion of future projects planned by the 2nd year students. He established a deep connection with the emotional intent behind each student’s chosen topic and definitely left the classroom feeling very inspired.

The tour finished off with a stylish photo-shoot in the PSC studio where Minister Herbert got various portrait shots taken and had fun posing with students and staff. He bid farewell, remarking that he would love to look into taking up photography after retiring from politics.