PSC Lecturer Brie Trenerry just presented her work ‘Total Field’ in a solo exhibition at the Australian Experimental Art Foundation (AEAF) in Adelaide, for an entire month from November to mid December.

The AEAF has been dedicated to new breakthroughs in visual arts since 1974, by artists who wanted to bring about a new approach to art. Believing that art is experimental, reflecting life in certain ways that should be open to public criticism, the AEAF has exhibited works of only prominent artists who are making history with their work and styles. Their focus on research-driven projects that extend themselves to debates and movements in contemporary culture, signifies that Brie’s latest showcase was critical in the current art movement of Australia. 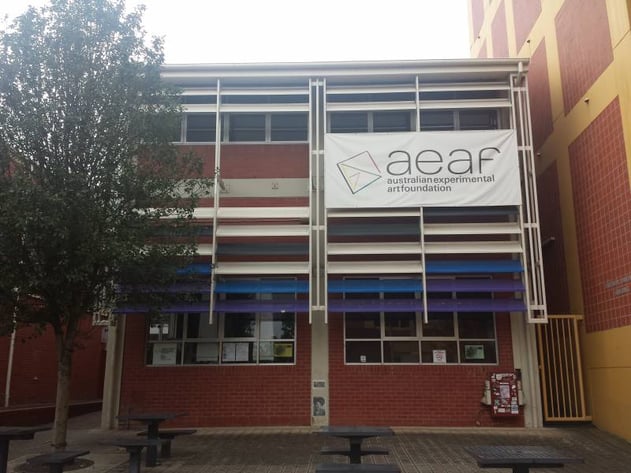 Brie Trenerry has specialised in screen-based media since 2002, being a major exhibitor in festivals such as Westspace, White Night, Artspace and has grown her international presence at renowned galleries in cities like Santiago, New York, Berlin and London. Being the co-founder of Moonlight Cinema Adelaide and Kings ARI, Brie has taught video and post production at VCA and RMIT, before coming to PSC. Her project ‘Total Field’ has been described as an ‘experimental installation’ which makes use of cinematic elements. It looks at the relationship between the experience of moving images and altered states of consciousness. Involving concepts such as ‘vertical editing’, Brie experiments with the use of spatial montages and continuity.

Brie Trenerry's Installation at AEAF 2015
Having influential artists as part of our teaching cohort is one of the things that makes the PSC community so special.  This gives students an opportunity to learn from important game-changers in the field of visual arts as they journey into their own careers in photography.  As the nature of the photography industry becomes more technology driven and competitive, students at PSC are constantly encouraged to adapt to new concepts and create work that drives new trends.