LOCK ME UP. LOCK ME DOWN. Michael Coyne Writes About Isolation as a Photojournalist in the Frontline for Better Photography Magazine.

PSC Senior Fellow and World-Renowned Photojournalist Michael Coyne writes about being isolated in the most remote and dangerous places.

Michael's work has appeared in National Geographic, The New York Times and Time Magazine. He is also a Fujifilm X Ambassador, author of numerous books and winner of many international awards.

This story has been repurposed from an article in Better Photography Magazine. 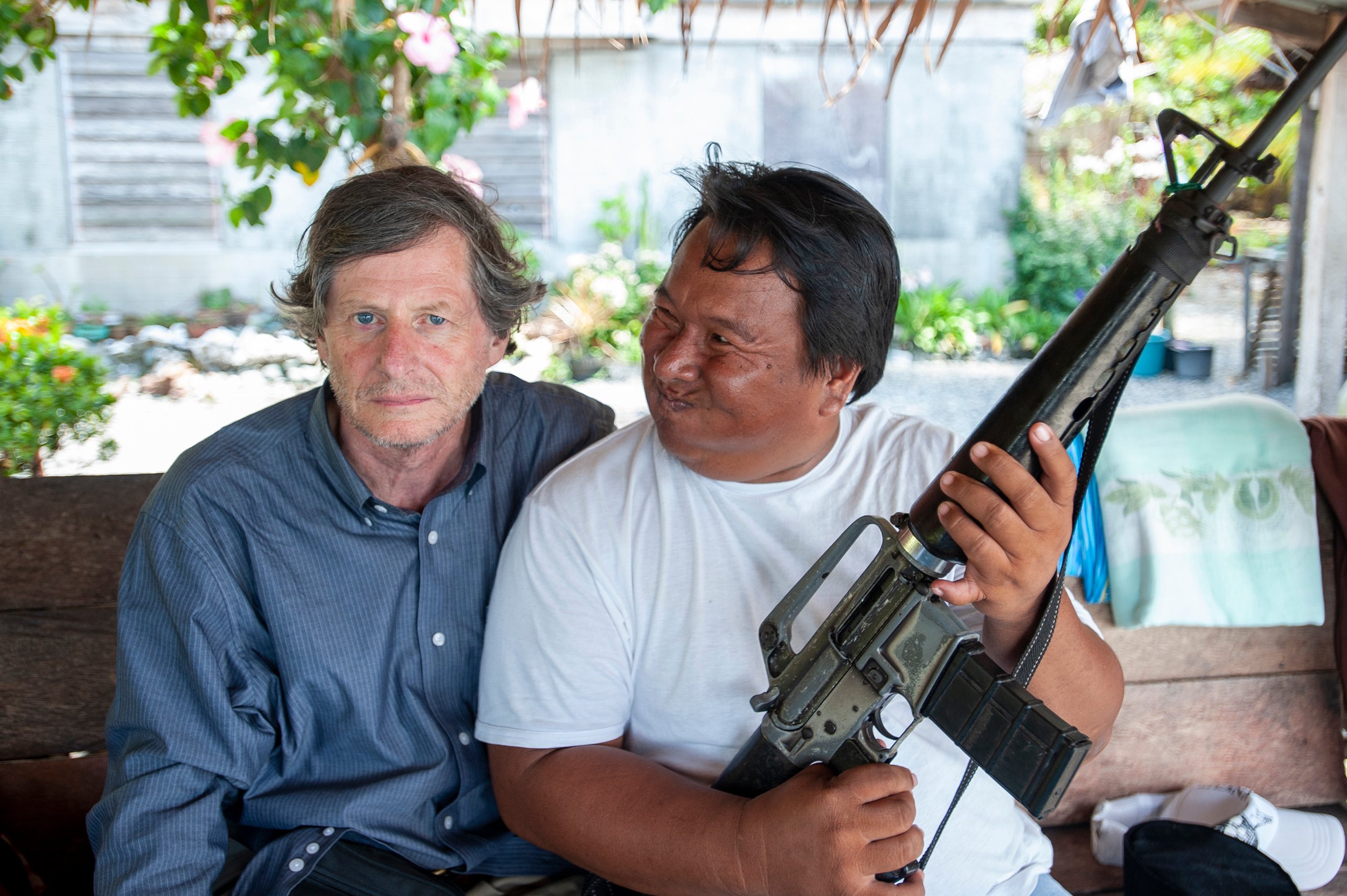 Michael Coyne with an anti government rebel while working in Asia.

I was working with a group of revolutionaries in Jordan when one of their leaders was killed by a bomb as he started his car. Nobody was supposed to know the whereabouts of this man. I was the only outsider with the group, so suspicion fell on me.

One of the interesting upshots of working with groups on the fringes of mainstream politics is the amount of time you spend waiting for something to happen. Like soldiers in combat, it’s ten percent of action and ninety percent waiting.

Once in Asia, having made contact with an anti-government group, I was told to wait in a downtown hotel. Hotel was a polite euphemism for a grubby room the size of a suburban bathroom. The room had tiles falling off the walls, stains, (who knows what) marking the floor and bed. It was hot and sticky but there was a fan, a ceiling fan, that clicked ninety times a minute. I know this because all I could do was lie on the bed, watch and listen as the fan whirled around and around and around. It stirred up the air but it didn’t keep me cool.

I was in the room for a number of days waiting for the revolutionaries to come and get me.

One night three men in medical garb came to my door, grabbed my gear and manoeuvred me down the backstairs and through the kitchen into a waiting ambulance. I was shoved on the floor, a blanket thrown over me and we drove through the police and army checkpoints up into the hills where the rest of the rebels were waiting. My escorts threw off their medical clothes, grabbed their guns and we headed out into the jungle.

What do you do while confined to a small space with no distractions? What do you do when you’re locked up for who knows how long, with no phone, television or books and often no electricity?

During my time in a hut in Guyana, South America, I would crawl around looking for snakes, rats and mosquitoes. At night, by the light of my candle, I checked to make sure none of these unfriendly creatures were sharing my bed or abode. Of course, there was always one mosquito that managed to evade scrutiny and end up on the bed inside the net.

National Geographic photographer Sam Abell once spent all day locked in his Moscow hotel room shooting pictures of pears on the window ledge. Abell spent twelve hours shifting the curtain, moving the pears, changing the angle and lining up the Kremlin as a background. By using his time in confinement, Abell managed to create one of his best known images, Pears in Window, Moscow.

American photographer W. Eugene Smith moved into a self-imposed eight-year lockdown at a loft in New York’s flower district. While there he produced 40,000 exposures of the street scenes four floors below, and of the jazz musicians who hung around his building.

During the Tiananmen Square protests, a number of photographers who were held in confinement by the Chinese government managed to capture, from their hotel windows, the now iconic, poignant and powerful image of a man standing in front of a tank with his shopping bag.

Confinement, self-imposed or otherwise, gives photographers a chance to slow down and take the opportunity to think from a new perspective.

It’s also about seizing the opportunity. While working on assignment in Uganda on the Sudanese border we were forced to stay in a guarded compound. The region was notorious at the time for harbouring local bandits, rebels from Sudan, and rogue armed forces. Shortly before I arrived two of my associates had been shot at and wounded, barely escaping with their lives. On one occasion while there I left the compound and followed an aid worker to a medical hut. The worker emerged from the hut shortly after with a new-born baby, so malnourished that it fitted into the palm of his hand. The mother had fled Sudan arriving at the camp just before giving birth.

Sometimes while being in lockdown I’ve had to share a room. I was covering a conflict in Asia where villagers had been attacked and a nun raped. The convent, where I was housed, had been burnt and all but one building destroyed. They did, however, have a room where I could stay and I crawled into bed in the pitch-dark. I awoke to sound of the rain hammering on the roof and the sight of mosquitoes using my net as a trampoline. As I rolled over, I was confronted by a very life-like statue of the virgin Mary hovering over me. An unnerving sight for a young Catholic boy like me.

I once tried to break out of captivity after being locked down for an interminable amount of time. I was in Iran to cover the missile attacks by Iraq during the Iran/Iraq war. The government forbade me to leave the hotel without a minder from the Ministry of Islamic Guidance, MOIG. After days of waiting in my room, drinking tea and watching sporting events for war amputees on television, it was getting a bit tedious. I was lucky though to have two rooms as few people were coming to Iran during the missile attacks. I don’t blame them… Those missiles do a lot of damage.

I would start my day with press-ups, sit-ups and knees ups. Then I would plug in my earplugs, turn on some music, which had been approved by MOIG, and run around the two rooms innumerable times listening to Mozart, Bob Dylan and Paul Simon. For variety, on alternate days, I would change the order of the music and the direction of my sprint.

Finally, one day I managed to sneak out of the hotel and walk for about half a block. Suddenly, a car drove across the footpath blocking my passage. Two men got out demanding, “Hand over your passport, handover your wallet”. Without any thought or hesitation I ran. Perhaps being locked up for so long had given me extra courage. Back in the hotel I spoke to the manger who immediately phoned the police. An hour or so later I’m at the police station being led to an interview. As I walk through the building, I see two men sitting in an office. “That’s them, those guy’s over there”. “Don’t be silly” the sergeant said, “They’re police officers”.

Later, returning to the hotel, I saw an Iraqi missile hurtle across the skyline, perhaps being locked up in a lockdown wasn’t such a bad idea after all.

Except, of course, when revolutionaries threaten to shoot you. After several days of waiting in my hotel room in Jordan I went looking for the hitman who had forecast my imminent demise. “Sorry,” he said. “We found out it wasn’t you. I should have told you earlier.”

This story was repurposed from Better Photography Magazine.

Topics: In the Press