Over 80 artists are donating their artwork to support the victims of Australia's ongoing bushfire crisis at the art fundraiser 'Small Mercies' from 20-23 February 2020. PSC's Master Of Arts - Photography Course Convenor Dr. Kristian Häggblom, Graduates Darren Tanny Tan and Nathan Larkin, and MA Mentors Siri Hayes and Jessie Boylan are contributing work. All of them briefly share their stories on how the fires affected their friends and family, why it's important for the local arts community to come together as a collective to galvanise action to aid the recovery process, and how an art fundraiser like this can be cathartic for the artists and public.

The huge task of Coordinating the exhibition has been undertaken by artists Tara Gilbee and is supported by Creative Spaces, which is a program of Creative City at the City of Melbourne.

Image by Kristisn Häggblom, 'Some Domestic Rocks' from his 'Brunswick Surfaces' series.
PSC: Why did you get involved in this fundraiser?
Dr. Kristian Häggbolm: Since the fires I have had a heavy feeling of helplessness. I strongly believe that art can - and should - not only hold a mirror to society, but also bring about change. This initiative is a great example of how artists can bring about positive and reflective actions. People in the affected regions will need ongoing support for a very long time. It is important to remember that the devastating affects will be ongoing for decades. The donated artworks and associated events will act to remind us of the support needed.
PSC: Tell us about the work you chose to donate?


KH: 'Brunswick Surfaces' is a psychogeographically influenced photographic exploration of the iconic inner-city suburb of Melbourne. The project is a personal ethnographic study that looks to the surfaces, and often micro details, of the urban environment to understand contemporary relevance and conflict. These images are part of a sub-series titled 'some domestic rocks' that celebrate the often obscure manner urban dwellers incorporate nature into their living spaces. 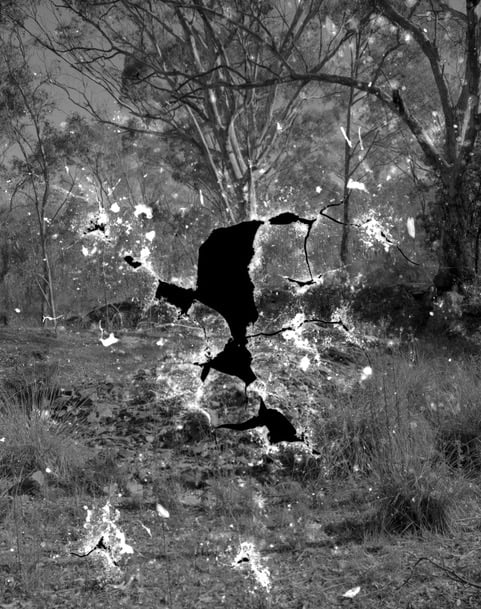 Image by Jessie Boylan, ‘Forest Creek #4’ from her series ‘The Umbra’

PSC: Why did you get involved in this fundraiser?

Jessie Boylan: Like many of us during the most recent horrific bushfires that tore across Australia this spring and summer, I have been sitting with an uncontainable fear, anxiety and dread. At times I was almost unable to complete basic and necessary daily tasks. I watched news and social media feeds, listened to live radio broadcasts and just couldn’t stop crying. I grew up in Canberra and spent my childhood in places on the South Coast, I was just about to get in the car with my partner and children to head to there when everything turned really really bad.

Friends of mine slept in evacuation centres and escaped as soon as the roads opened. My dad’s house was under threat in Tantawangalo and I thought that he seriously might die then and there. I visited East Gippsland to participate in the feeding of wildlife in the desecrated bushland and saw just how stark it is after such intense fires. I also saw how regrowth has started to come back, how wildlife survived and how communities have banded together to gather and disseminate supplies across a large area.

I have felt as if the past few months in Australia has really shaken us, as a nation, as individuals, as communities. So, as powerful as the fires, so too as has the response been from the artistic community across Australia. Artists of all kinds have been organising fundraisers and gathering together those who are amongst the more economically marginalised professions to raise hundreds of thousands of dollars for the victims of the bushfires, with an incredible outpouring of love, solidarity and grief. So I wanted to participate in this and even though it is a small act, it is an act nonetheless.

PSC: Tell us about the work you chose to donate?

JB: This work, ‘Forest Creek #4’ is from a larger body of work ‘The Umbra’, which, in an assemblage of partially destroyed images, obscure gestures and repetitive acts, reconsiders places and landscapes, once known intimately, have become forever changed after major upheaval, devastation and rupture- personal and environmental. It explores places around where I live in Central Victoria, that too has seen massive change since colonisation and the gold rush. I had been working on another project which explores the ways in which the body and the world mimic each other in modes of panic and crisis, and this work became a part of that investigation; how does what is happening environmentally embed within us, psychologically and physically? The work was part of a group exhibition with the photography collective Lumina, at the Ballarat Art Gallery (Echoes) from December, 2018 - March, 2019. 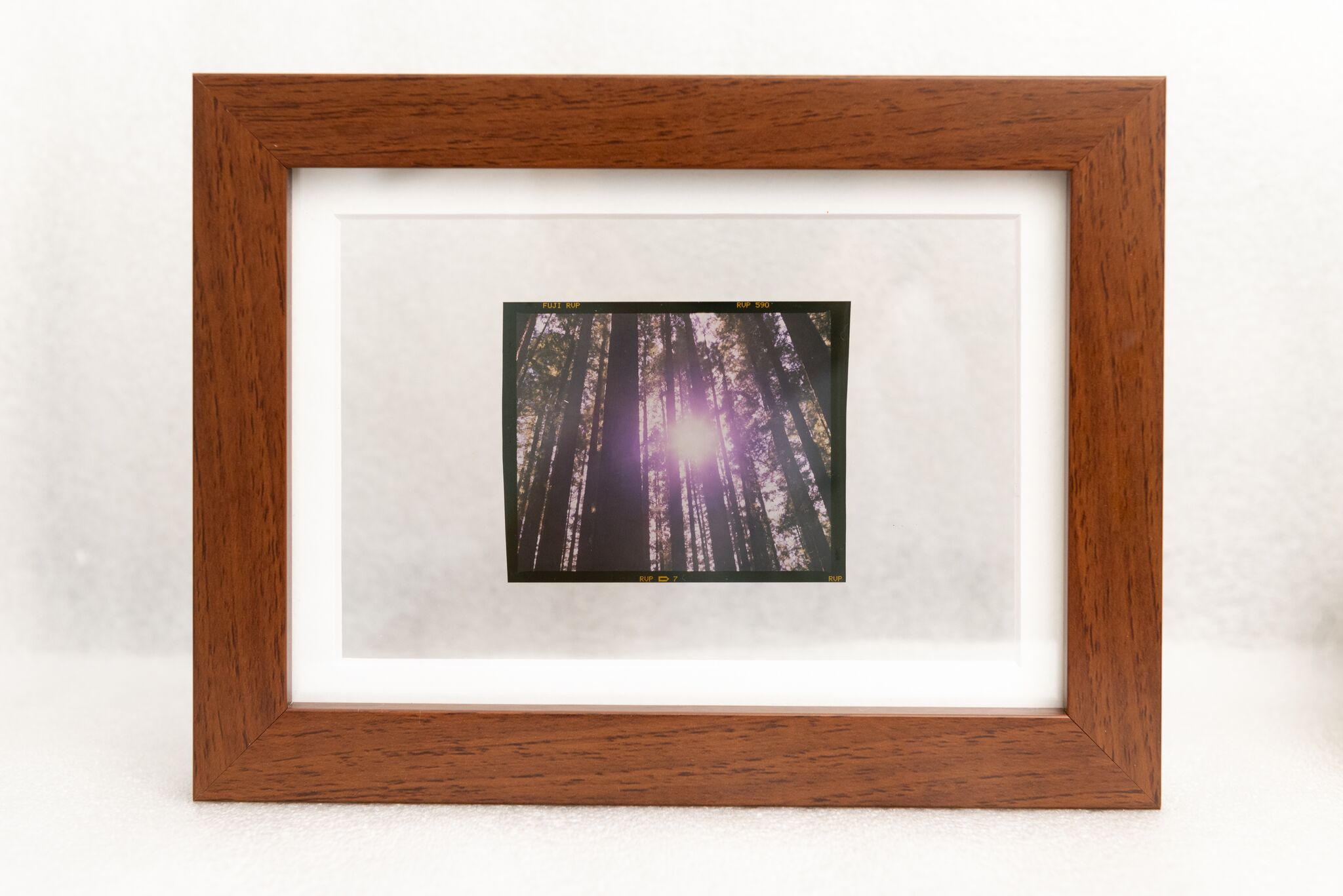 Image by Nathan Larkin.
PSC: Why did you get involved in this fundraiser?
Nathan Larkin: It was not long after the fires had been raging in our state. There was a lot of misinformation going around and I had a lot of friends in direct lines of the fires and was trying to keep in close contact with them, as well as try and work out ways to help. I spent a lot of my youth in Bairsdale and the surrounding areas with my Grandparents. At one stage and still to this date, I have offered free family portraits to all those affected as well as free digitising of all their images. This will in turn help them protect their history for quite a long period. After this post of mine was shared around a lot I was approached by Tara Gilbee if I would be interested in making or suppling a work for the exhibition for sale with all money going to the bushfire victims. And I couldn’t help but say yes.
PSC: Tell us about the work you chose to submit?
NL: The work I submitted is a slide I made a while ago while working on, and still currently, a project thinking about our environment and my connection to the city and country alike. As part of this investigation I was making images in the Warburton Redwood Forrest in Cement Creek. These trees were planted as part of the CSIRO Hydrogeology programs of the early 1930’s and are now protected by Heritage Trust. This is a place that reminded me of my Grandfather and his time as a logger. For me the area holds a memory of my grandfather and spending days logging in the old growth forrest in South East Gippsland for locals to use as firewood. These trees hold memory and time, they record everything as they grow. They are the lungs and filters of out lives, and the loss of forrest from the wild fires will take 100’s off years to be realised, repaired, and rejuvenated. These new trees will record if we have decided to change our ways towards the environment and how much better we decide, as a community and country, to take care of everything. 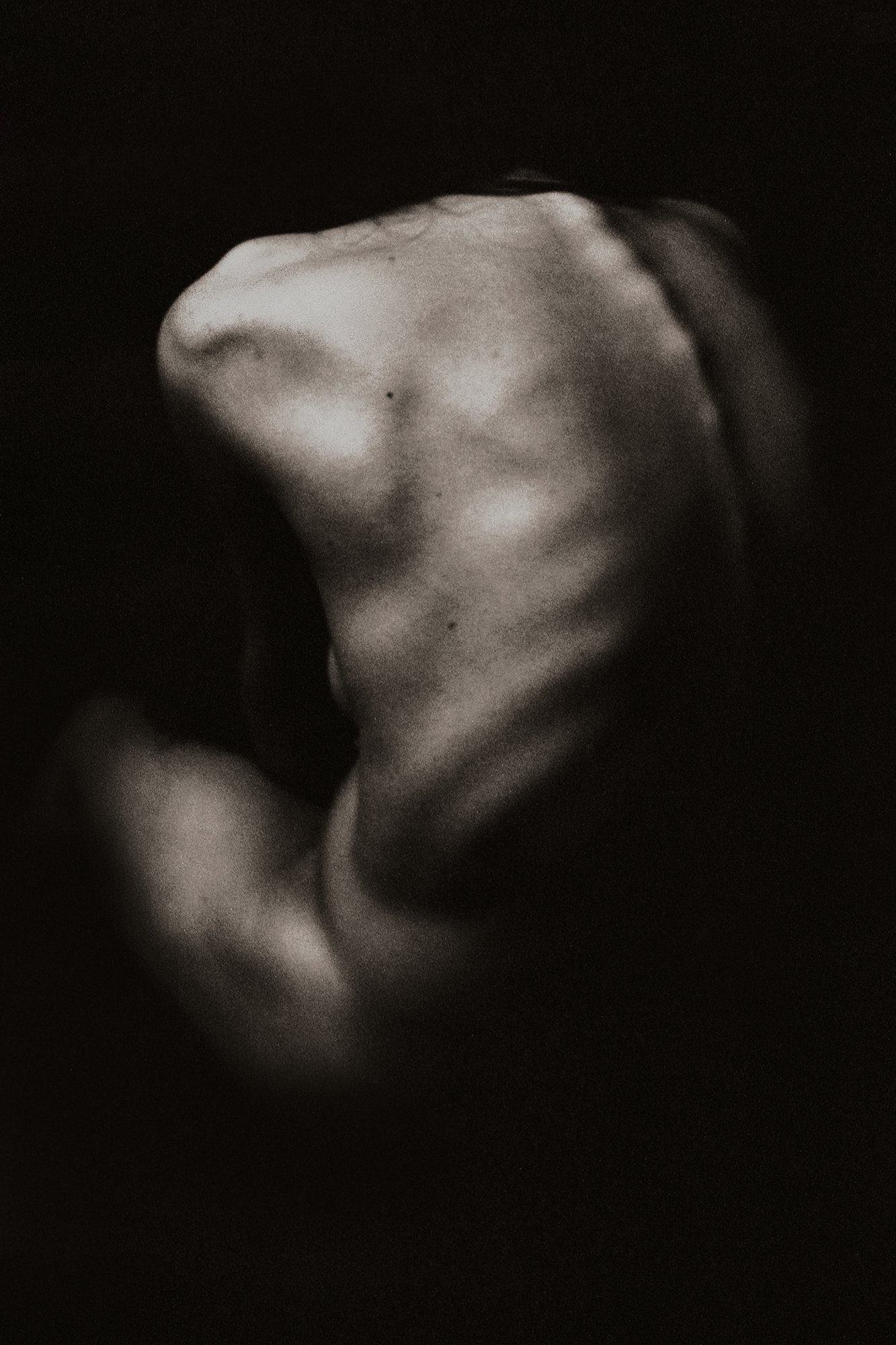 Image by Darren Tanny Tan
PSC: Why did you get involved in this fundraiser?

Darren Tan: The impact of the ongoing bushfire crisis has been devastating, to say the least. I remember one particular morning earlier in the year while scrolling through social media, being crippled by the onslaught of traumatic images—I could only imagine what it must have been like for those who were directly impacted by the bushfires. Even though the fires have been contained by recent rainfall, it is important to remember that many individuals and communities are still recovering from the catastrophe. Small Mercies fundraiser presents itself as an opportunity, on an individual level, to contribute to the bushfire relief in a small way, but more significantly, as a community, to support and to keep in remembrance, those that have been adversely affected.


PSC: Tell us about the work you chose to submit?

DT: The image that I have chosen to submit is from an earlier body of work that centres on the human body as the locus of emotion. It comes from a personal belief that the body is a physical trace of the past as well as a housing for the individual's spirit. Coinciding with themes of grief and loss, it serves as a reminder that feeling—to embody emotion and sensitivity—is an important part of the healing process. 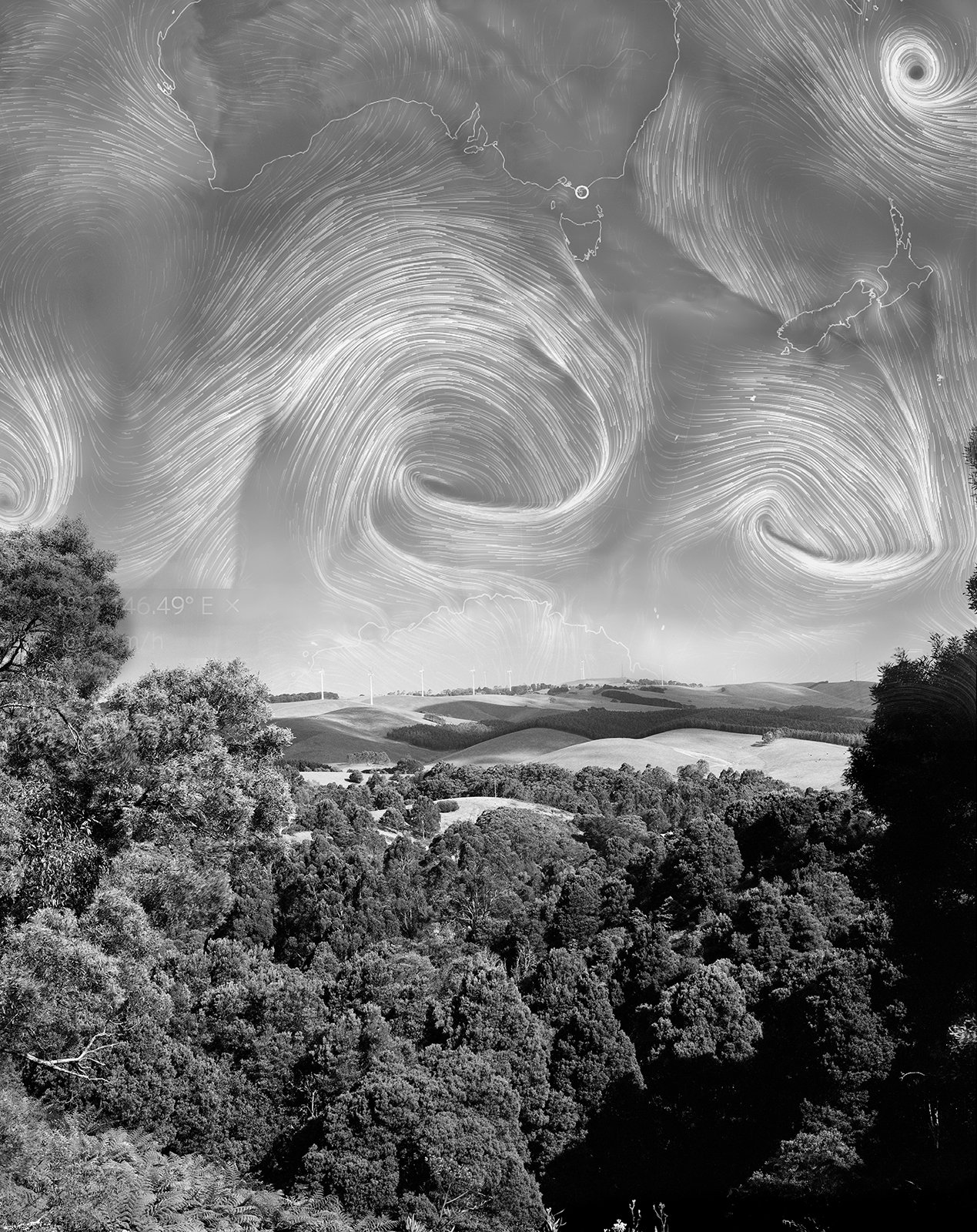 Image by Siri Hayes, 'The Southern Skies All A Swirl '

PSC: Why did you get involved in this fundraiser?
Siri Hayes: I got involved because, like the rest of Australia, I think I'm in shock about the horrific fires that have occurred across Australia this summer and this seems like a positive way to contribute. I'm also not rolling money so if I can help raise funds than that's great. I feel strongly that supporting the Firesticks Alliance is a positive way forward in getting behind first nations thousands of years old wisdom on caring for country. Finally, too many animals perished and so many more need help therefore it makes sense to also raise funds for Wildlife Victoria.
PSC: Tell us about the work you chose to submit?
Siri Hayes: I have been involved in three bushfire relief art fundraisers this summer and I wanted to make a special edition of a work I felt was relevant. I decided The Southern Skies all a swirl would be a good choice because it was a poster I was commissioned to make for Climarte a few years back that was commenting on climate change. I decided to look at wind as a renewable resource. I went down to the wind farm at Toora in South Gippsland and photographed it. The evening after I took the photo I looked at an animated wind map from the same day and pinpointed the location I'd been in. I used a screenshot of it to created the swirling sky in the image. I like the nod to Van Gogh.

Join PSC's tutors, graduates and Mentors this Thursday 20 February at 6pm for the opening of Small Mercies. It will be held at Warehouse Unit 4, 41-59 Sims Street, West Melbourne. The fundraiser runs till 23 February. 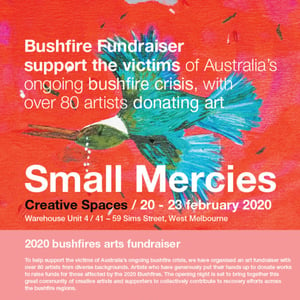