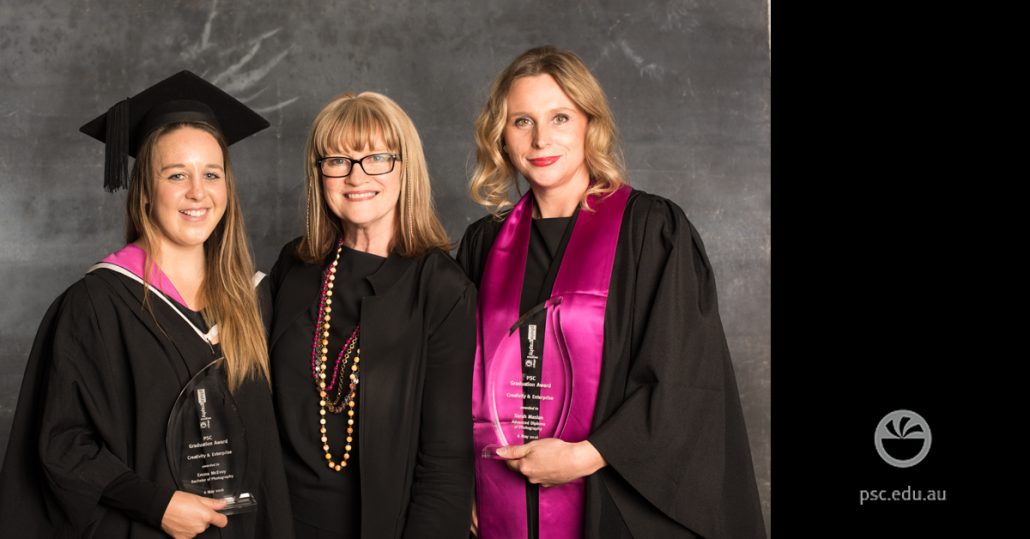 During the spellbinding graduation ceremony held at ACMI on the 6th of May, we applauded our students who had made their mark in the field of photography, with our sponsored awards of the evening. Let's take another look at our winners and thank our sponsors who played a big role in enhancing their future.

Ilford Imaging is a premium image processing and production company that was established in 1879 (U.K) and is one of the 'earliest adopters of digital imaging technology for photographic and commercial wide format markets'. With technology partners in countries such as Germany, Switzerland, Japan and Australia, Ilford has won the TIPA award for Best Inkjet Photopaper for two years in a row. Elena D. San Roman (advanced diploma '15) and Sophie Pigram (bachelor of arts, photography '15) were the winners of the prestigious award for 'excellence in art'. 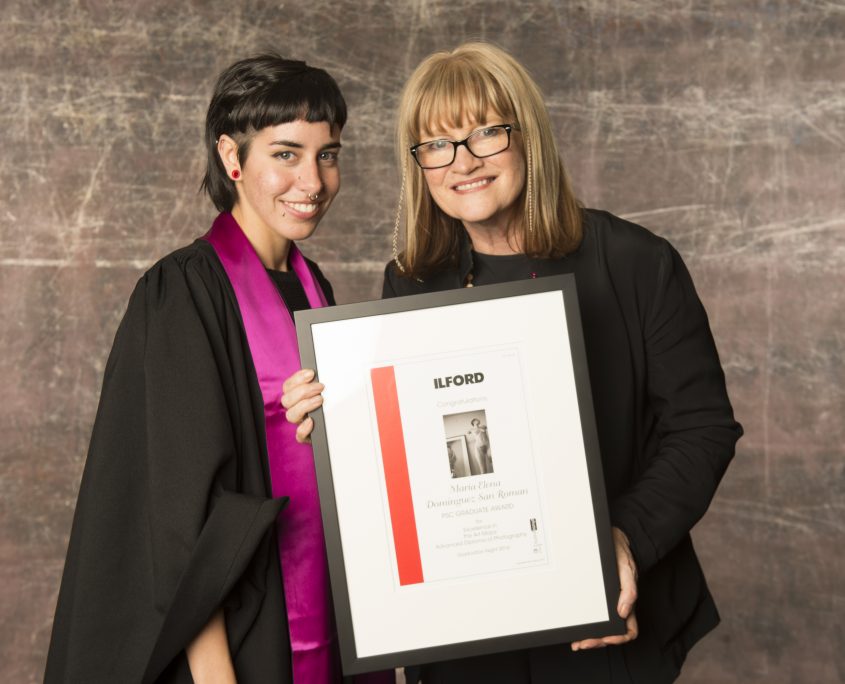 The next award went to two highly prolific photographers who have seen their work published in numerous commercial magazines. Jessica Hollingsworth (advanced diploma '15) and Cassandra Tzortzoglou (bachelor of arts, photography '15) received the award for the 'excellence in commercial photography major' award by Sunstudios - the providers of the best lighting and camera equipment in the country. Jessica Hollingsworth and Cassandra Tzortzoglou are worthy of such an amazing award, with their work printed in publications such as Jute Magazine, Fashion Weekly, Archive Collective Magazine, Culture Magazine, MOD and Fashion Journal Magazine.

Supplying the best products that support our photographers and provide imaging solutions, Borges Imaging, Bowens and Kayell Australia have been prominent names in the Australian photography industry for the past thirty three to forty years. They are three companies that have always kept their pulse on the latest technologies available for our students.  For 'excellence in the photojournalism major' Borges Imaging and Bowens presented the award to Adam Kemp (advanced diploma '15) and Clare Steele (bachelor of arts, photography '15) received her award from Kayell Australia. Adam Kemp recently had his folio 'Skateboarding Culture' presented as part of an Australian Photographic Gallery series (by Echo Publishing). On the other hand, after having her photobook acquired by the National Library of Australia a few weeks before graduation, Clare Steele is on her way to be a part of PhotoIreland this year for an eventful period. 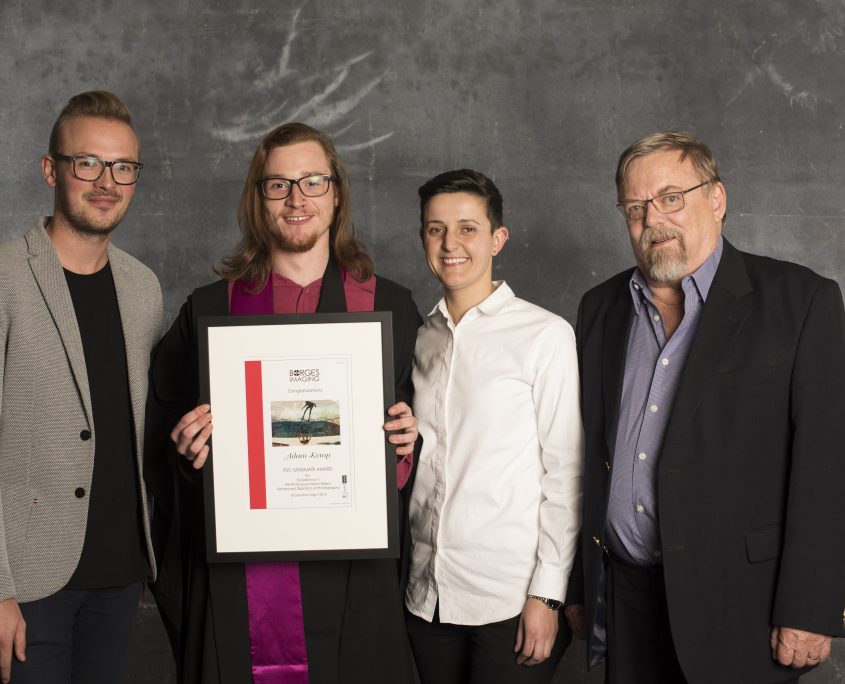 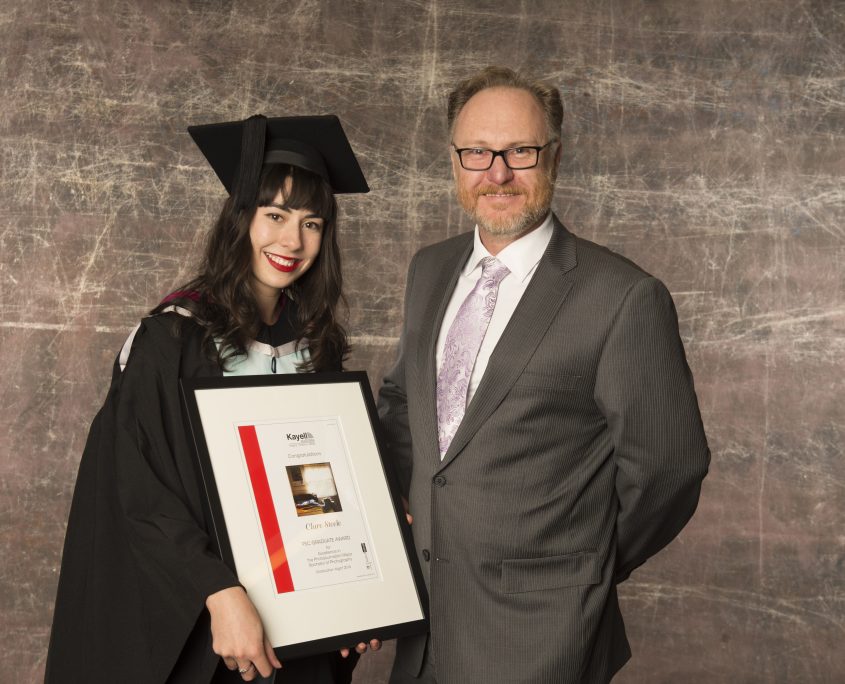 Peter Petty played a major role in the development of Neurosurgery in Australia, from the time of his appointments as Assistant Neurosurgeon at both The Royal Melbourne Hospital and Prince Henry’s Hospital in 1967 until January 2010. He was appointed Senior Lecturer in Anatomy at The University of Melbourne in 1962, and was an extraordinary anatomist and teacher.  As with everything he did, he brought both a practicality and intense scientific interest to his teaching.  Fortunately for us - he was also a student here at PSC. In recognition of this passion, his daughters Susie and Liz have established a special graduation award in honour and in memory of their father, after his demise. 2016 marks the last year that we present the 'Peter Petty Memorial Award' and the talented recipients of the award were Timothy Allen (advanced diploma '15) and Lucie McGough (bachelor of arts, photography '15). 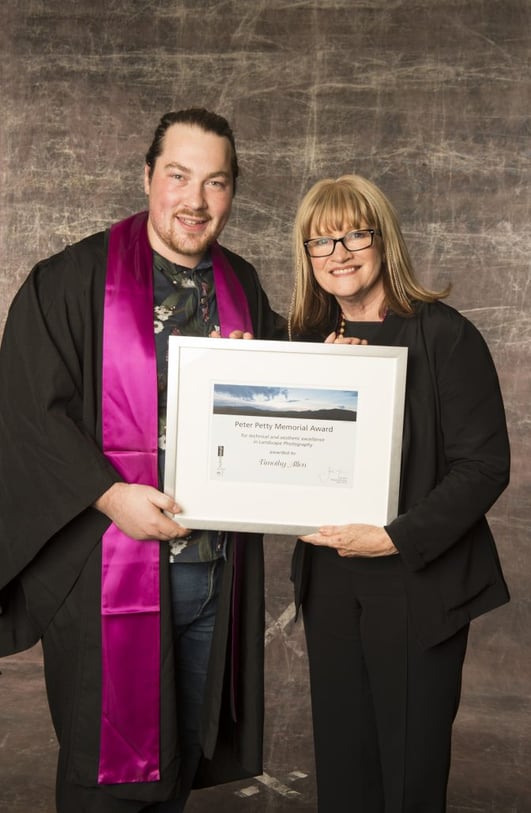 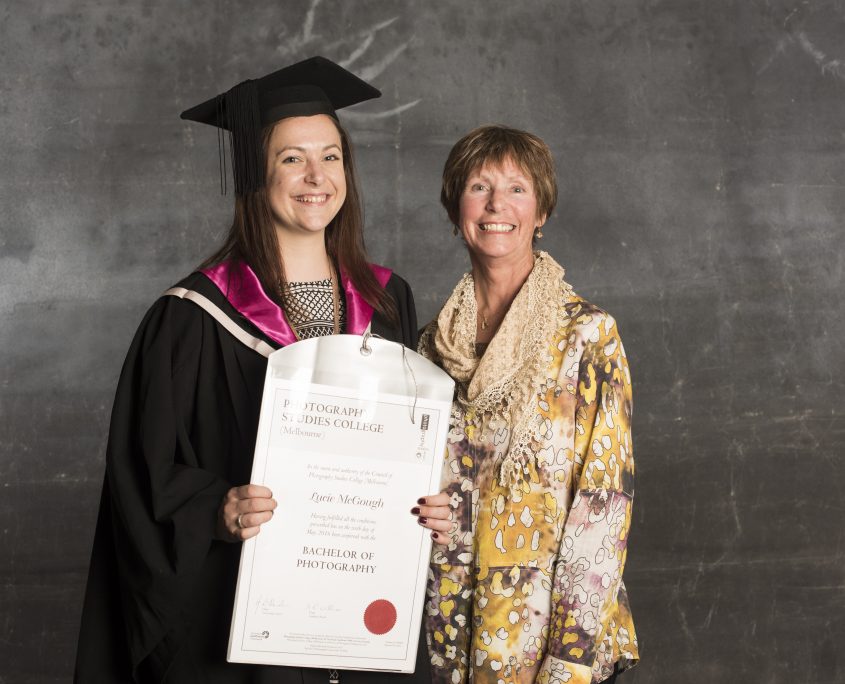 Lucie McGough with her Mother

This year, we were pleased to have Ian van der Wolde - the chair of the compliance committee of AIPP who also served as the national president for the AIPP- an organisation that 'advocates for excellence in imaging and is the membership organisation of choice for professional and aspiring image makers'. Ian is in fact, a former graduate of PSC. The AIPP and our college have a long standing relationship with many of our teachers holding AIPP memberships and students who win awards at competitions hosted by them. This year, Mr. Wolde presented Vicki Moritz (advanced diploma '15) with the award for 'conceptual excellence and photographic innovation'. Vicki was the 2015 AIPP Australian Student Photographer of the Year in 2015.

Amongst our array of distinguished guests, Reymond Chapman (the partnership sales manager of Adobe Australia) attended our graduation ceremony to present the 'Adobe Award for determination and creativity in final year'. PSC is thankful to have this award, with our students working entirely on Adobe systems and software to produce their award winning work in college and for the industry, worldwide. Our deserving winner this year was Jordan Madge (bachelor of arts, photography '15). Jordan wasn't present to receive the award due to being in Tokyo, Japan for his own exhibition opening 'Shokai'. He was also the winner of the Photobook Melbourne Award of 2015. 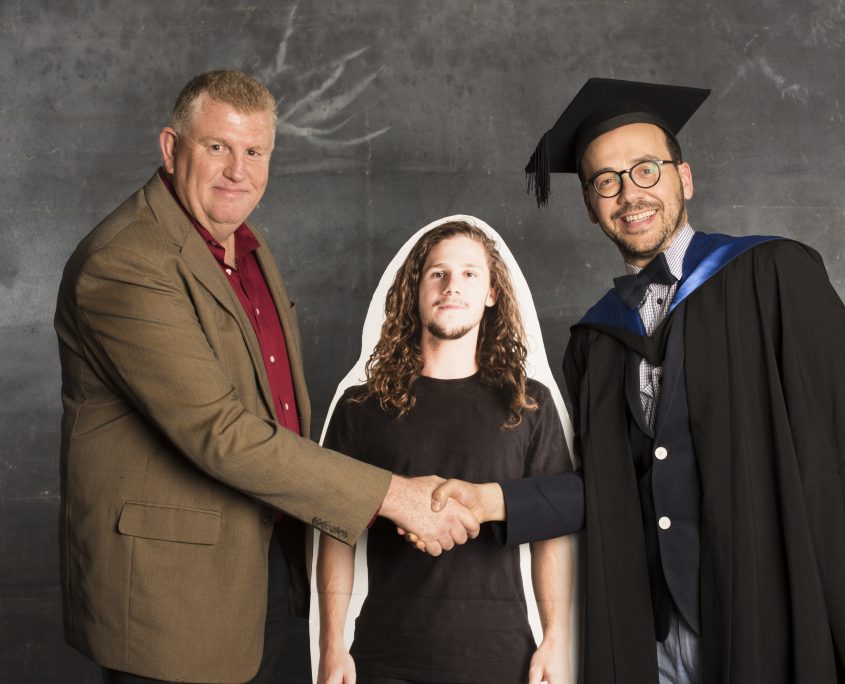 Reymond Chapman and Daniel Boetker-Smith (Jordan Madge was in absentia)

The wonderful and incredibly influential Sally Brownbill was also present at our event. She is the founder and owner of The Brownbill Effect - the industry's unique and most comprehensive creative directory for photographers and businesses. Sally Brownbill has been an active course advisory committee member of PSC since 2013 and has an extensive experience in the international filmmaking scene - having worked in the U.K and Europe. She gave the renowned 'Sally Brownbill Award for great potential in commercial photography' to Marisa Ho (advanced diploma '15). Marisa Ho already has a successful string of commercial clients - working on weddings, architecture and for dance companies such as the Australian Ballet. 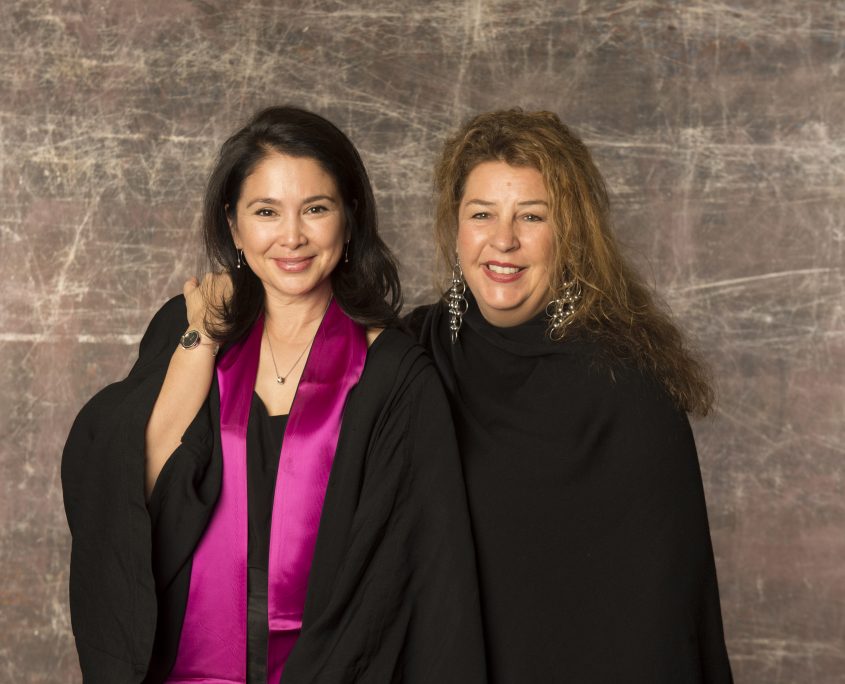 Julie Moss also presented a special award from Exetel - 'Australia's largest independent internet service provider'. Olivia Mroz (bachelor of arts, photography '15) won the Exetel award for 'excellence in reflection and self expression in photography' - a quality that we hone in our students while they develop projects at PSC. Olivia Mroz has been recognised as one such student who has exemplified her penchant for making her work highly expressive and reflective of her style. She won the Silver Award for AIPP Epson State Awards, Melbourne for her photobook 'Amelia' in 2015 and has had her work published in DEW and Y.AMB Magazine in the same year. 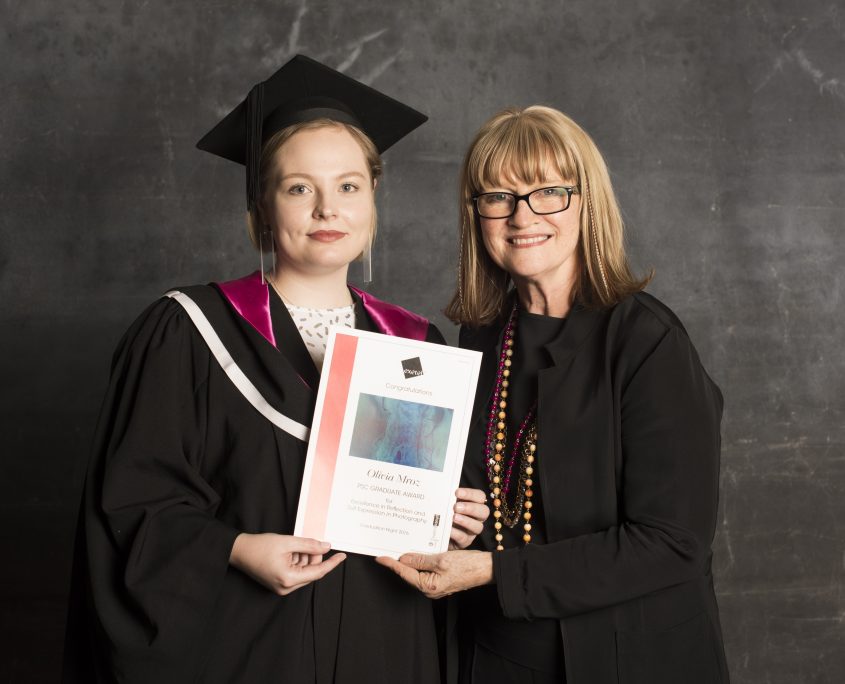 The PSC community was glad to have Robert McLaren, from Irwin & McLaren Bookbinders at the ceremony. Robert is the descendant of Jim McLaren, who established 'James McLaren Pty Ltd' in 1903. The company offers the finest paper manufacturing and binding services in the country and we are pleased that they play an active part in our students' journeys. Robert McLaren presented the prestigious award for the 'excellence in documentary photography' to Daniel Pockett (advanced diploma '15) - one of our most successful students, who was selected for an internship with The Age late last year. Daniel was also assigned by Getty Images to cover fun and mayhem on the tennis courts of The Australian Open. He was also a finalist for the AIPP student photographer of the year Gold Award in 2015, where he also received a silver distinction. 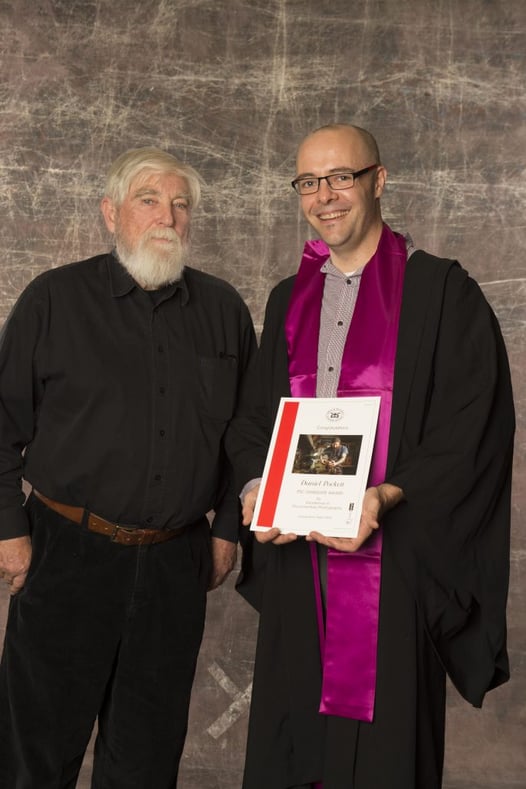 We were also happy to have Debi Mac with us to present the Heartfelt award for using photography to make a difference. Heartfelt is a volunteer organisation of professional photographers from all over Australia and New Zealand dedicated to giving the gift of photographic memories to families that have experienced stillbirths, premature births, or have children with serious and terminal illnesses. Ebony Finck (advanced diploma '15) won this award for her series 'Juncture' that was described by GUP Magazine as 'a meditation on mortality as life comes to a close'. 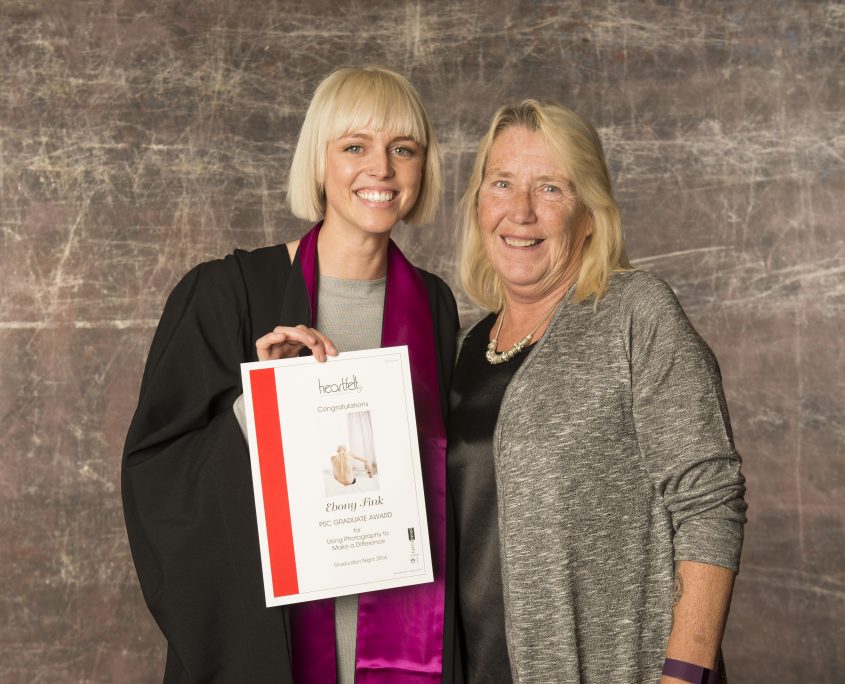 Finally we had two PSC sponsored awards for the evening that recognised our winning students' potential in professional photography while reflecting on their dedication to learning and creativity at PSC. The PrintShop at PSC Award for 'commitment to learning' went to Marie Watt (bachelor of arts, photography '15) and the overall PSC award for 'creativity and enterprise' went to Sarah Maslan (advanced diploma '15) as well as to Emma McEvoy (bachelor of arts, photography '15). 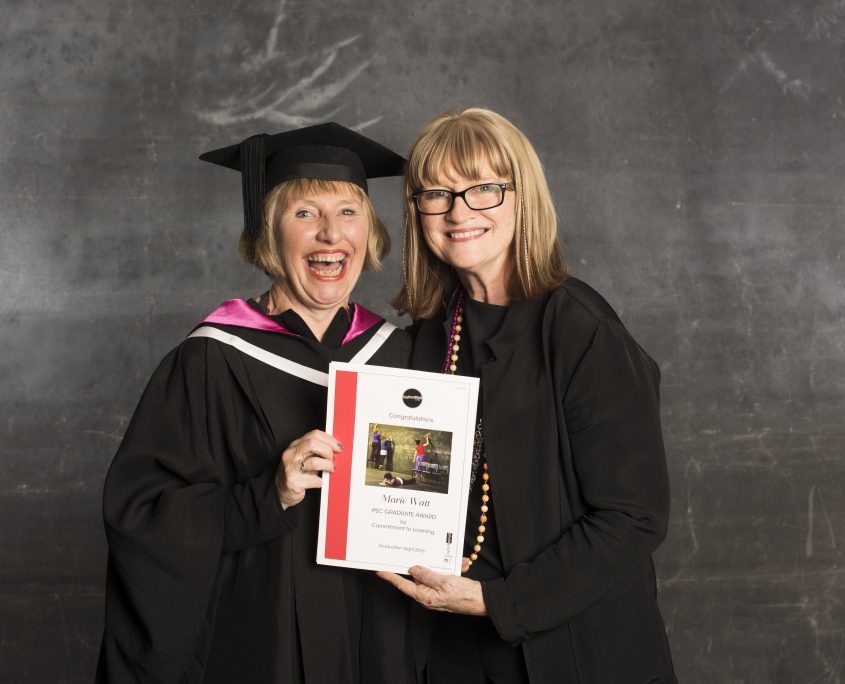 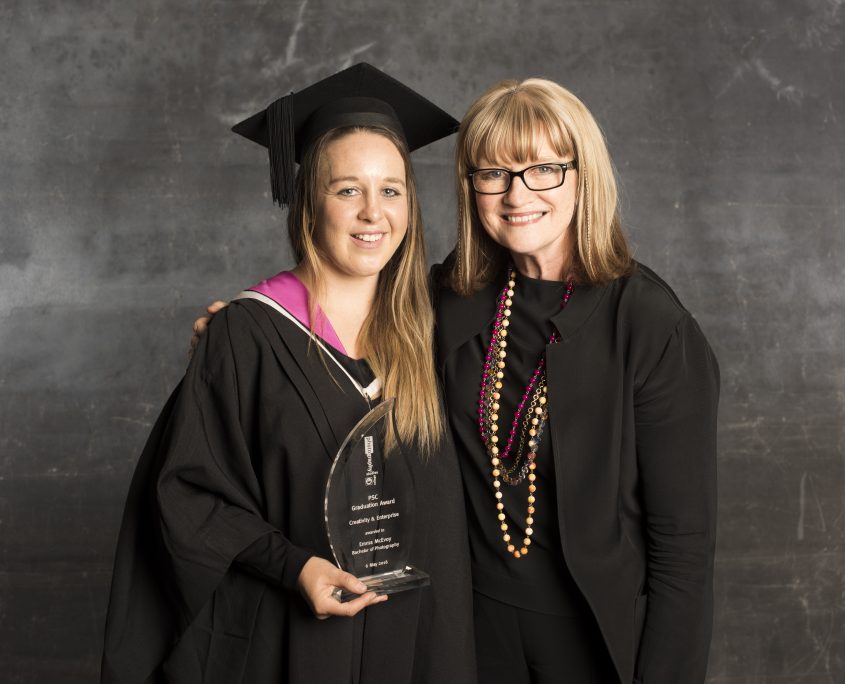 The graduation ceremony was a success, with our staff and students feeling proud of their accomplishment in the field of photography. Every year PSC increasingly sends out award winning photographers into the industry. We thank our sponsors and look forward to many more years of incredible growth and know that our students are prepared for the exciting and competitive world out there! Their foundation and newfound skills in photography were developed and supported by the Academic Board, members of which have taken continuous care in ensuring the best photographic education provided to students, in Australia. 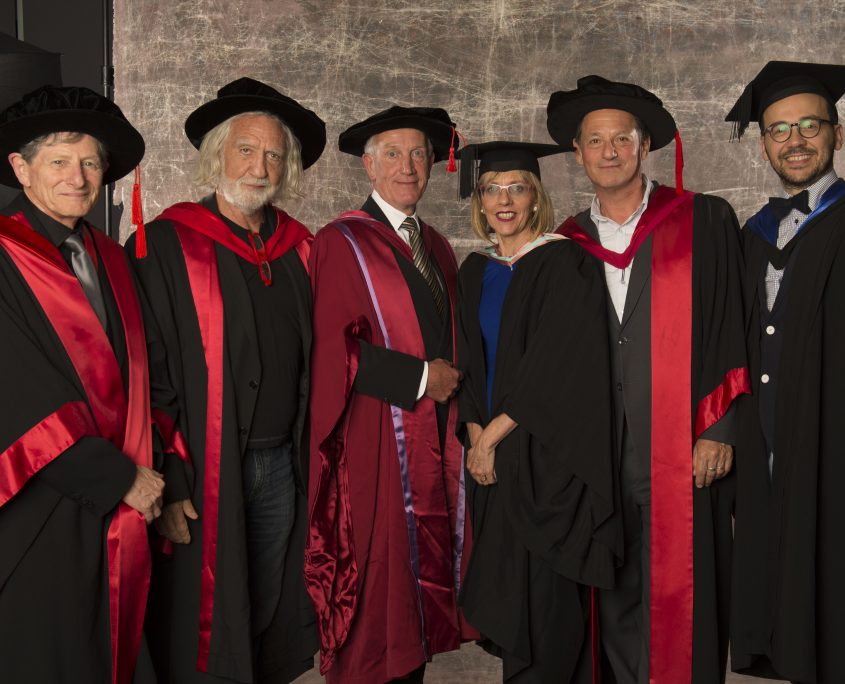 The PSC Academic Board