Documentary Photography Can Be A Force for Good

The smoke was slowly spiralling from the woman’s ear as the surgeon leaned over to complete her work.

The doctor was performing a middle ear operation for a patient on The Lifeline Express, a train that has been converted into a travelling hospital. The train journeys across India to poor, remote villages, and the medical staff from India and overseas donate their services for free. On this occasion, we were parked at the Wardha railway station in the state of Maharashtra while the medical staff performed surgery and provided treatment for polio, cleft palates, middle ear infections, cataracts and dental conditions.

Documentary photographers are often accused of focussing on the negative side of life, only taking pictures of dead bodies, conflict and misery. One critic claimed that some photographers climb over loving couples, cooing babies and contented grandparents in order to shoot the only negative aspect of an event. To a certain extent the critics are right but I don’t believe this is always the truth.

For instance, in my project about Village Life, I am trying to look not only for the challenges facing rural communities but also the joy, rewards and life enhancing moments that can be found in villages.

Recently, I was in Italy photographing Italo Mondovecchio, a farmer from Tuscany. “Can I get my chicken?” Italo asked. He returned from the shed tenderly holding a beautiful looking bird. I lifted the camera to take the portrait and immediately Italo burst into song serenading, with gusto, his best friend, the rooster. 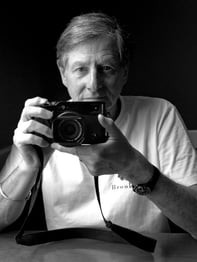 Dr Michael Coyne has worked as a photojournalist for over 30 years, covering significant events in places as diverse as China, Papua New Guinea, Cambodia, Indonesia, the Middle East and Africa. His work has been featured in magazines such as: Time, Life, Newsweek, and National Geographic. Michael's extensive work has been featured in a number of solo exhibitions around the world. He spent eight years in the Middle East documenting the rise of Islamic fundamentalism. He covered the Iranian revolution and the Iran/Iraq war, for his work he received a number of awards.Michael has had many successful books published and three documentaries films have been produced about his life and work. In April 2003 Michael was awarded the Centenary Medal by the Australian Government for Service to Photography and in 2007 the AIPP (Australian Institute of Professional Photography) awarded him an Honorary Fellowship.